From Drunk Dude to Dude Making a Difference

From Drunk Dude to Dude Making a Difference 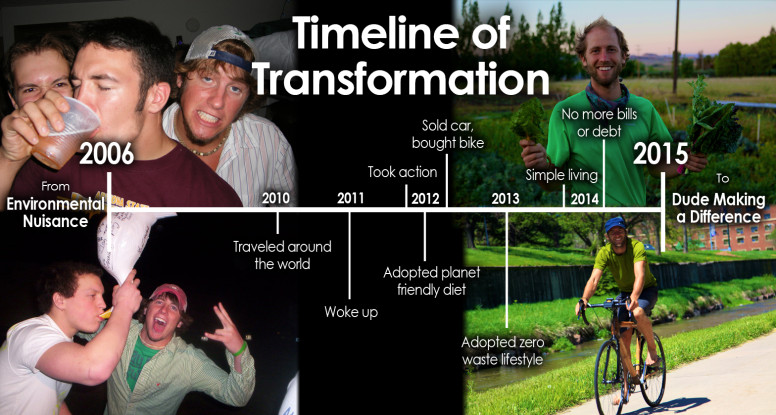 Not that long ago my main priorities included binge drinking every weekend, looking good, and macking on pretty much every good looking girl I saw.  I also wanted to be rich and to own lots of really impressive things.  I was pretty tuned into that life and didn’t really think too much about how my actions affected the environment, people around the world, and the animals that we share the earth with.  I was pretty selfish and if I did think about my actions I certainly didn’t do too much about it.  I did recycle, shut off the lights and water, and eat healthier than the average person I knew and I thought that was doing pretty good.  But the list of negative environmental impacts was far greater than my positive impacts (which was nearly nonexistent).  I owned two cars, shopped at Wal-Mart for my food and my cheap crap, drank the cheapest beer I could find, took home my share of plastic bags, wasted plenty of water, ate too much meat, needed the newest gadgets always, and the list could go on and on.  Not that any of these things are inherently bad but they definitely were not deeply serving myself or the earth.

Then reality hit in 2011.  I became educated.  I decided to act on that education.

I gave up on restrictive social norms and stigmas and embarked down a path of living for the benefit of the earth, my community, and myself.  Here I share with you the timeline of my last four years of transformation from an environmental and social nuisance into being of benefit to the environment and society.  I share this to give a real life example of transformation and to show you that no matter where you are today you can lead a much more earth friendly lifestyle if you choose to.  Most of the items on the timeline represent simple changes that you, or anyone, can take but remember that every life is unique and this is not designed for you to follow exactly.  However most of the things in here can be adapted into your life if you truly desire for them to.

For me it was all about taking it one step at a time and continuing that from week to week, month to month, and year to year. When I started this transformation I would have had a really hard time believing that I’d get to where I am today.  The only way that I’ve made it here is by taking it gradually, setting little goals, and building on the momentum and excitement of each success.  Then making those things habit.  It wasn’t always easy but it has been extremely rewarding and extremely fun.  I am happier and healthier than ever before but most of all I am living with so much more purpose. I’m no longer causing reckless destruction to the earth, to innocent lives, or to my own and that is a huge sigh of relief and really has me jumping for joy.  I’m proud of it all and know that has come by taking responsibility for my actions.  I am proud that I know how my actions affect the world both near and far.  I am proud to be of benefit to the earth and society.

Here is my timeline.  May it serve you well.

2005-2009 Went to UW-La Crosse for Biology but focused on beer, women, and fun mostly.  I also traveled the country and world quite a bit, worked really hard during the summers, and developed substantially as a human.  I was driven to be successful and was, but I left the environment on the wayside and thought mostly about myself.  I wanted to be a millionaire.

01/2010 – 05/2010 Traveled around the world and gained an appreciation for how diverse and immense the world is and a desire to protect it.

10/2011 Left my homeland of Wisconsin Indefinitely

11/2011 Started to get into sustainability and began to pay attention to things like trash, resource consumption, growing food.  Started to learn about how my actions affect the earth, other people, and animals from documentaries and books.

02/2012 Decided to take action on what I learned and began a transformation into a healthier, more natural lifestyle and refused to make bad influences on earth.  There was no moment of clarity or significant occurrence, just a realization through education that my simple daily actions were causing a lot of destruction to the earth, to fellow humans both near and far, and to the creatures that I share the earth with.

03/2012 Pulled my money out of investments that had any involvement in businesses that do harm to the environment.  Started to question whether I wanted to pursue making lots of money and paying taxes that contribute to war.

By getting rid of my car I found that my consumerism became much more responsible.  It was no longer as easy to go out and buy crap and I no longer had a trunk to put the crap in. I started purchasing less stuff, shopping local, and supporting ethical businesses.

06/2012 Inspired greatly by One Percent for the Planet I began using business as a means to help improve the world around me.  I began transforming my business so that every aspect was a part of the solution, not the problem.  Projects I started included a community bike program, trash cleanups, and energy efficient light bulb exchanges.  Around this time is when I really started to find purpose in giving back to others.

06/2012 Got a vasectomy so that I could dedicate my time on earth to the masses, rather than to raising my own child and also to set an example of a man taking responsibility for birth control.  (I know this one is extreme.  This was a very personal decision and is not something I’m out advocating for others to do.  I do highly advocate being responsible and taking having a child very very seriously though.)

07/2012 Took my first long distance cycling trip and during that trip furthered my earth friendly diet by:

08/2012 Was really starting to surprise myself doing things that I never thought I could. My body was in prime physical condition simply by having fun in the outdoors, living naturally, and getting around by bicycle (not by going to the gym). Time after time found myself doing things I never knew I could do before.

09/2012 Learned that I could run barefoot pretty well when I ran an impromptu 10k barefoot at a pace of 7 minutes per mile.

11/2012 Embarked on my first moneyless adventure and flew one way to Cabo.  This was the beginning of experiencing that I could live on much less money than I had thought.

01/2013 Officially changed my life title to adventurer and started a website for $100.

04/2013 Embarked on my first major environmental adventure, Off the Grid Across America.  I cycled 4,700 miles across America practicing extreme resource conservation.

Creating near zero trash and carrying whatever I created for the entire journey.

Using water directly from natural sources or water that is going to waste.

I managed to use just 160 gallons of water, create a mere 2 pounds of trash, plug into only 5 outlets, not turn on a single light switch and consume 280 pounds of food from grocery store dumpsters.

I also gave up weed, alcohol, and swearing for the summer and have held to it except for occasional drinks.  (I do strongly support the responsible use of marijuana but it doesn’t serve me personally.)

09/2013 Parted ways with my last business slacks and tie

11/2013 Moved into a 6×6 closet in my own home to live rent free.  Got rid of nearly half of my personal possessions.

11/2013 Left my phone at home for Thanksgiving.  This was my first time leaving my phone off and at home while in my own town (not camping, in Mexico, etc.).  I had realized how addicted I was to my phone.

12/2013 Spent a week on the streets to learn about homelessness and gain perspective.  ReadGandhi biography and was heavily influenced.

01/2014 Embarked on first major international travel without possessions or money.  More than ever lost interest in money.

04/2014 Finished a year without showering

05/2014 Finally put water efficient shower heads and faucets and LED bulbs in my house.   I had overlooked this and thought it was too expensive in the past.  I was wrong about that.

06/2014 Cycled across America again this time to spread goodness

Paid off my last debt

08/2014 Traveled moneyless in the USA for the first time

It’s been a wonderful life so far and the last four years of transformation have absolutely been the most meaningful years of all.  At this point I feel like I have made most of the changes necessary to live for the benefit of the earth, my community and myself.  However each day I gain more knowledge and with that will be taking even more responsibility for my life.  I encourage you to follow your dreams but at the same time live for the benefit all.

Rob Greenfield is an adventurer, activist, and dude making a difference. His purpose is to inspire health, happiness, and freedom on earth and he’s dedicated his life to this mission. He has cycled across the USA twice on a bamboo bicycle, went a year without showering, and has dove into over 1,000 dumpsters across America, all to inspire positive social change. When not out adventuring he lives in a 50 square foot tiny home in San Diego. His attention grabbing tactics are often a bit extreme and crazy but the messages behind them teach simple lessons that can be adapted into any life to live with more happiness, health, and freedom.

By Molly Brown in Mastershift on February 6, 2015

How To Use Guided Thought To Be Authentic

How to Help Someone Suffering From an Eating Disorder

The 4 Steps Towards Harnessing Your Power