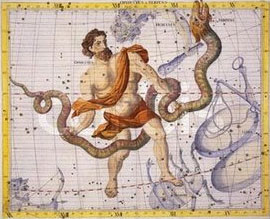 Widely known information within astrological circles recently became widely known information around the nation. A new zodiac sign called Ophiuchus has revolutionized popular astrology by altering the dates of all the sun signs and increasing the total number of signs to thirteen. People having grown accustomed to their sign are now in a frenzy. Others embraced the change as something new.

What an interesting time for this new zodiac sign to go viral.  Amidst all of the global changes taking place causing chaos, revolutions, and technological breakthroughs, up pops a new astrological symbol that couldn’t be more relevant. Synchronistically this new zodiac enters the scene ushering in the consciousness of much needed healing in society. The healer, so to speak, has arrived.

Accepting proven facts, as well as considering new ideas, are steps towards healing.  According to astronomer Parke Kunke all the astrological records need to be rewritten to include the long ignored sign of Ophiuchus. The precession of the equinoxes as it effects Earth causes the stars in the sky to change their position due to the wobble of the Earth on its axis over thousands of years. The complete precession cycle is twenty-six thousand years long and also changes the sun’s location over time, affecting which signs it touches in its journey through the zodiac relative to Earth. Here is a link to a video explaining in more detail.  http://www.youtube.com/watch?v=ktIoy1w6ipM

While being associated more in eastern sidereal astrology, some of the traits linked to Ophiuchus are interestingly relevant to Ascension, also having to do with the evolution of consciousness on Earth. Ophiuchus is known as being a doctor, or healer. Some other characteristics include having a big family, welcoming change, expressing honesty, and being a seeker of peace and harmony. Ophiuchus perfectly symbolizes these much needed transformative healing traits within global society. Welcoming a new global human family is expediting changes in the way we live on the planet. Rooting out corruption as well as honesty becoming more prevalent within governments and corporations are effects of humanity seeking ways to live in peace and harmony.  Let the healing continue.

Ophiuchus is also identified as a scientist, an intellectual, and being enlightened. This also stirs up thoughts of the Mayan 2012 phenomenon where our solar system is becoming aligned with the energetic center of the Milky Way galaxy. The center of the galaxy is also connected with enlightenment, or the higher self, also known as the Jungian self, and fascinatingly enough, Ophiuchus is the only human form constellation that resides in the direction of the center of the galaxy.

Earth and her inhabitants are said to be undergoing a planetary paradigm shift into an enlightened global society, and by looking around at the global events taking place we appear to be well on our way within the transformation. Humanity coming together striving towards truth, conducting ourselves in honest ways, healing ourselves, society, and the planet, and living as an enlightened people in peace are all among the popularly acknowledged results. World religions and ancient civilizations share the same prophetic beliefs, only expressed in different ways with different words, including the merging of science and spirituality, equality among all, the two becoming one, east meets west, and all of that fun stuff. At second glance, it looks like the healing is already well underway.

Ophiuchus is also known as the serpent holder, which immediately flashes images of the biblical story about the Garden of Eden, you know with the tricky serpent that’s always meddling in things. Well here Ophiuchus is depicted as holding a serpent, marking a return, signifying he has learned from the serpent and has become a master in the process. That tricky serpent causing so many issues over the years, so we thought, has really helped humanity to awaken. All of the testing and tempting helped to keep us on the ascending path, and the serpent now helps bring about a healing process. Ophiuchus is able to hold the serpent representing that he has become a master. Attributed globally as the awakening of humanity, the kundalini, and the self.

The number thirteen is a powerful number in metaphysics, symbolizing the foundation of humanity and for the future. By transcending the “wheel of twelve” and allowing the energy to spiral, instead of circle endlessly, while also resonating with the number thirteen humans are able to access and maintain a conscious connection to their higher self. Reconnecting with our higher self is also at the core of the Mayan 2012 phenomenon, the Satya Yuga, the Hopi 5th World, and the Age of Aquarius, among other names given to this new epoch.

Evidence abounds supporting that the old ways of thinking aren’t working anymore. All of the changes taking place in society shows us that corruption, lies, illness, among other maleficence are being transcended daily. New ways of living are developing. Things change by way of acknowledging facts, and implementing solutions, lest they become obsolete. Solutions seen as benefiting all of humanity, all of the planet, and also Mother Earth herself are happening within society by way of the new planetary consciousness. Perhaps for astrology that means new mathematical formulas, and for society some new monetary policies. Some new transportation and traffic systems would be nice too. All of that would certainly cause more sizable change, after all the only constant in life is that everything changes, which keeps things flowing and exciting!

Embrace Your Fear – A Loving Exercise