The Ego Is Dead!

The Ego Is Dead! 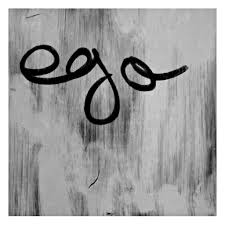 What is the ego?

ego : the opinion that you have about yourself

psychology : a part of the mind that senses and adapts to the real world
Source: Merriam-Webster

Much has been written about the ego. You would have thought that it was something that actually existed observably like a rock, a seashell or a goat. Instead, it is merely a theory, idea, thought form, concept. The more you believe it to be real, the more real it becomes.

The ego, in describing one’s identity as a “self” or separation and individuation from one’s birthmother, represents something that can be ‘proven’ to exist. It is a healthy part of differentiation. Yet, the negative connotations ascribed to the ego, are what concerns me. The “ego” is required to undergo a conversion, a rewiring, a redefinition.

How has self-identity come to denote a bad thing? To the extent that people actually feel the need to apologise for having an ego and cleanse their sins away for being so selfish. In actuality, we are created via the illusion of separation, so it feels very real to us. This is the challenge and opportunity of being human beings tasked with free will decision-making and experience.

It seems to me that both goals can co-exist – different paths to the same goal which is universal. Some might seek love, prosperity, adventure, happiness, peace, yet everybody wants to feel fulfilled.

How we define words is key to communication. The word, “ego” is an ambiguous word that many people seem to regard with at best regret, at worst, disdain and shame. It is regarded as the devil that needs to be rejected, purified and the source of most of our problems and unhappiness.

In psychology, the original “ego” was actually neutral, denoting the self-preservation and self-focus of the identity. Later, “ego” denoted “self” and then branched out to mean something different – an engorged, ignorant and gross from of selfishness and narcissism.

This self-centeredness could then be argued to be at the centre of unhappiness.

If the ego is a veil between us and God (as Rumi wrote), then isn’t it time we killed the ego?

The death of the ego is said to involve a loss of the division between the self and the environment, hence one become “one” with “all that is”.

Eckhart Tolle writes that his ego died in 1977 after sustained periods of suicidal depression – he woke up one night and decided, “I couldn’t live with myself any longer. And in this a question arose without an answer: who is the ‘I’ that cannot live with the self? What is the self? I felt drawn into a void. I didn’t know at the time that what really happened was the mind-made self, with its heaviness, its problems, that lives between the unsatisfying past and the fearful future, collapsed. It dissolved.”

The next evening, Tolle found that “everything was miraculous, deeply peaceful. Even the traffic.”

The self we think is “real” is a creation, and we have many transient selves mostly created by our childhood upbringing, beliefs, and social constructs. Will the “real” self please stand up!

Without other people, we don’t exist in relation to others, we exist as one self experiencing itself with the illusion of aloneness. Who are we in actuality? It seems to me that our relationship to others is a crucial part of how we define, invent and reinvent ourselves. We are social constructions as much as anything. We are changing and happening beings like the seasons.

Unhappiness is not our natural state. Neither is worry, confusion, fear, angst or terror. It is self-centeredness that fuels unhealthy attitudes that lead to such states of unhappiness.

Buddhist thought highlights the illusion of separation, as well as the folly in attachments to things or situations. The ego as a psychological term has been folded into Buddhism and some have included it as part of Buddhist thought. “Ego” is originally a Latin and Greek (ἑγώ) word meaning “I”. Sigmund Freud popularised its usage as part of his structural model of the psyche – Id, ego and super-ego.

What is the authentic expression of our nature?

I believe love and compassion are the most natural components of self. It is society that has created an ugly, ignorant and selfish version of the ego – that needs to be reclaimed. The self is not ugly. The self is not selfish. Bodhicitta (altruism) is our natural expression; it’s in our nature to do good. Meditation allows us to connect to this consciousness or expanded awareness that is our real nature.

The Ego is Dead! Long Live the Ego!

David G Arenson ND, Naturopath, Spiritual Nomad and Transformational Coach. An international speaker, author, healer and trainer, David is the founder of METAMORPHOSIS RETREATS. David integrates spiritual journeying into grounded wisdom for everyday living, presenting powerful concepts in personal change and living on purpose. David believes our world is as we dream it— “Our collective dream is what has created our current world. I look forward to dreaming with you and creating dreams that we can be proud of.” To find out more, visit his website, findshambhala.com—or email him at [email protected]. You can also connect with him on facebook and twitter @davidarenson.

By Millie Parmer in Mastershift on February 4, 2014

The Blooming and Healing of Creation

By Rev. Robert Meagher in Mastershift on February 4, 2014

The Emotional Eater: How To Stop Feeding Your Pain And Feed Your Soul Instead

5 Obstacles on the Spiritual Path