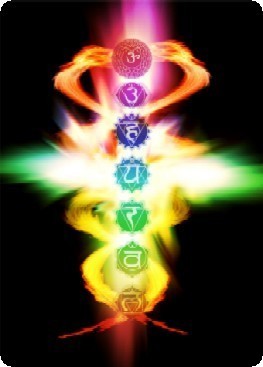 Here, I’d like to take a look at kundalini, which is essentially an evolutionary/energetic ‘boost’ we can gain with focused, meditative effort. As we’ll learn here, kundalini is referred to as an energetic ‘serpent’ because it’s coiled up in the root chakra, and it can be awakened and used to find a permanently blissful state of consciousness.

With focus and intention, we can actually uncoil it and bring it up through each chakra until it reaches and affects the crown. Those of us who are particularly passionate about meditation can meditate on our kundalini for hours on end, and if we do, we might just manually raise it and feel what full-on enlightenment is like.

There are a lot of benefits to awakening it and a lot of setbacks if we aren’t prepared for what could result, and one should always be prepared for the unhindered spiritual perception that results from awakened kundalini.

Themystica.com tells us that kundalini is a ‘psycho-spiritual’ energy.

“Kundalini is a psycho-spiritual energy, the energy of the consciousness, which is thought to reside within the sleeping body, and is aroused either through spiritual discipline or spontaneously to bring new states of consciousness, including mystical illumination.

“Kundalini is Sanskrit for ‘snake’ or ‘serpent power,’ so-called because it is believed to lie like a serpent in the root chakra at the base of the spine. In Tantra Yoga kundalini is an aspect of Shakti, the divine female energy and consort of Shiva.” (1)

The power of kundalini, we’re told, is huge.

“The power of kundalini is said to be enormous. Those having experienced it claim it to be indescribable. The phenomena associated with it varies from bizarre physical sensations and movements, pain, clairaudience, visions, brilliant lights, superlucidity, psychical powers, ecstasy, bliss, and transcendence of self. Kundalini has been described as liquid fire and liquid light.” (2)

Indian Yoga is primarily responsible for our knowledge of kundalini, but people like Carl Jung brought it to our modern society’s attention.

“Indian yoga, with its emphasis on the transmutation of energy to higher consciousness, was the chief contributor to the cultivation of kundalini and the preservation of its knowledge prior to present times. Kundalini was a rarity in the West before the 1970s until more attention became centered upon the consciousness.

“In 1932, for example, psychiatrist Carl G. Jung and others observed that the kundalini experience was seldom seen in the West.” (3)

I’d imagine people started really becoming aware of kundalini around the 60s and 70s when the consciousness expansion movement was flourishing (it still is in a lot of ways), but people have known about it for centuries.

We have a lot to learn in regards to the development of our spirituality and our perception of the realms that lay beyond the physical, and we’ll have a much better grasp on the innate spiritual nature of our existence when we learn the full and undistorted truth.

We’re coming together and providing this grasp for each other, but humanity as a whole needs to learn the truth before we can all awaken our kundalini and enjoy the enlightenment that results.

The Mystica confirms that kundalini has been well-known for thousands of years.

“However, an examination of mystical literature and traditions showed that kundalini, called by various names, seems to have been a universal phenomenon in esoteric teachings for perhaps three thousand years.

“Kundalini-type descriptions or experiences are found in esoteric teachings of the Egyptians, Tibetans, Chinese, some Native Americans, … Kundalini has been interpreted from the Bible as ‘the solar principle in man,’ and is referenced in the Koran, the works of Plato and other Greek philosophers, alchemical tracts (the philosopher’s stone), and in Hermetic, Kabbalistic, Rosicrucian, and Masonic writings.” (4)

As we can see, people have known about kundalini for a long time, and many of them strived to preserve the knowledge of it for future generations. It’s great that so many people have worked so hard to preserve the truth about it, and we can carry on their legacy by informing others.

People will obviously have to keep an open mind to believe in this etheric, enlightenment delivering energy, and needless to say, the rest of humanity needs to become aware of spirit and the wonders that exist beyond our conscious perception before any sort of kundalini awakening can take place – especially on a collective level.

The Mystica also describes the process of kundalini awakening.

“Not all kundalini experiences are identical to those classical awakenings experienced in yoga, but may vary in intensity and duration.

“Typically the yogi meditates to arouse the kundalini and then to raise it through his or her body. (It should be remembered though, not all types of yoga are devoted to the arousal of kundalini.) First, the yogi feels the sensation on heat at the base of the spine, which may be intensely hot or pleasantly warm.

“The energy then travels up a psychic pathway parallel to the spinal column. The sushumna is the central axis, crisscrossed in a helix by the ida and pingala. As it rises the kundalini activates the chakras in succession.” (5)

This would obviously take a lot of time and devotion. This is why I mentioned before that the seekers who are particularly dedicated to meditation can focus their meditative effort on awakening their kundalini, thus paving the way for others to do the same, and I think it’s important that we do.

Something tells me that the more seekers who activate their kundalini now, the easier it’ll be for the rest of humanity when the time comes, and I wonder if any of the momentous energetic events we’ll witness as a part of our ascension will assist us in awakening the kundalini.

Perhaps we have to be the ones to open it instead of waiting for any particular ‘event’, but it’d be interesting if the events we’re waiting to witness did provide some type of awakening or activation within.

We’re then told about some of the initial symptoms of kundalini awakening.

“The body becomes cold and corpse-like as the kundalini leaves the lower portions and begins to rise. The yogi is likely to shudder, tremble, or rock violently, feel extreme heat and cold, hear strange but not unpleasant sounds, and see various kinds of lights including an inner light.

“The length of the kundalini may be fleeting or last several minutes. The objective is to raise the kundalini to the crown chakra, where it unites with the Shiva, or the male polarity, and brings illumination.” (6)

Raising the kundalini to the crown chakra will provide the enlightenment every seeker strives for, and I’m sure it benefits every chakra it reaches before it hits the crown. The heart chakra is probably opened and expanded further to take in a greater amount logos, for example, and the throat chakra may open up and provide an enhanced ability to express oneself.

Our ability to feel the bliss that comprises the higher realms will grow with each attempt we make to activate our kundalini, and as with anything, practice makes perfect. We can’t do anything significant if we aren’t willing to practice it, and in the end, we’d be very glad we practiced awakening our kundalini.

As we’re told, however, it isn’t all sunshine at first.

“It is said that kundalini opens new pathways in the nervous system; the pain associated with this apparently is due to the nervous system’s inability to immediately [cope] with the energy. Yogis assert that the body must be properly attuned for Kundalini through yoga, and that a premature or explosive awakening can cause insanity or death.” (7)

We’d want to awaken our kundalini very gradually, and we wouldn’t want to experience the ‘explosive awakening’ mentioned here. We don’t want to do anything too rapidly, and our kundalini practice should be as gradual as our ongoing ascension.

We wouldn’t be able to handle being suddenly transported to the fifth dimension, because things would be too different and unfathomable. We’d immediately want to return home to the third, but we might find that the darkness here weighs us down too much for it to be comfortable anymore.

Similarly, we don’t want to activate our kundalini too quickly because we might not be ready for the perceptual boost that results. We’ll want to take our activation slowly, but our ascension isn’t about reaching the end anyway – it’s about enjoying the journey.

It’s about enjoying every meditation; every creative work; every attempted kundalini activation.

We aren’t necessarily here to complete the goal, even though we eventually will. We’re here to enjoy ourselves and love each other with the understanding that we’re one consciousness, and awakening our kundalini will help us find this understanding in a much realer way.

Our perception of our oneness will sharpen when we’re on a higher vibration, and those of us who hunger for spirit each day would benefit from practicing a kundalini-focused meditation. If we’re as ready to perceive the higher realms as many of us say we are, these meditations will be very enjoyable because we’ll know we’re reaching our sacred destination.

I might do a more detailed report about kundalini another time, but this basic information about it has satisfied my hunger for knowledge, and hopefully, you can all say the same. There’s plenty more to learn about this interesting energetic phenomenon, and you’re encouraged to follow the link in the footnotes (or do an internet search about this topic) and do more research.

With the willingness to learn everything we’ve forgotten, we’ll illuminate the big picture and raise our vibration in the process. We’re here to relearn things we once knew before we descended onto earth, and we have plenty of sources to choose from.

Share this article freely, and check out The Culture of Awareness daily news site.

About the Author:  Wes Annac

I’m a twenty-one year old writer, musician and blogger, and I created The Culture of Awareness daily news site.

The Culture of Awareness features daily spiritual and alternative news, as well as articles I’ve written and more. Its purpose is to awaken and uplift by providing material about the fall of the planetary elite and a new paradigm of unity and spirituality.

Intuitive and Instinctive Knowingness the Way of the Future

By Millie Parmer in Mastershift on December 15, 2014

Self Love -The Great Shortcut to Enlightenment

The Divine is Not a Circus

When We Let Go of the Ten Commandments

How to Shift from Motivation to Inspiration