By TheMasterShift in Healing January 19, 2017

While the term psycho-acoustic medicine may be relatively new in our world, the practices of using sound and frequencies to impact the physical and emotional health of the body has been used since the beginning of time. From Gregorian chants in churches, to the chanting of Tibetan monks, to Native American drumming, song and sound have been a catalyst in stimulating health and healing for the body and mind in all cultures. The definition of psycho-acoustic medicine is the science of how music and sound impact the nervous system, psychologically and physiologically. Simply, how it is how sound impacts the mind and the body. One particular area of this science of sound is that of “binaural beats.” Binaural beats were first theorized in 1839 by Heinrich Wilhelm Dove but was first scientifically tested and proven in 1973 by Dr. Gerald Oster, a medical doctor and biophysicist, when he published his finding in a research paper called Auditory Beats in the Brain. The study opened up a whole new area of science as it showed how sound affects the way and how quickly the brain learns new information, mood control, sleep patterns and healing responses within the body, among many other items.

How Binaural Beats Influence The Brain and Body

To begin, let’s first look at what binaural beats exactly are. Dr. Suzanne Evans Morris, Ph.D., who is a speech-language pathologist, states:

“Research shows that different frequencies presented to each ear through stereo headphones… create a difference tone (or binaural beat) as the brain puts together the two tones it actually hears. Through EEG monitoring the difference tone is identified by a change in the electrical pattern produced by the brain. For example, frequencies of 200 Hz and 210 Hz produce a binaural beat frequency of 10 Hz (The difference in 210 Hz and 200 Hz is 10 Hz). Monitoring of the brain’s electricity (EEG) shows that the brain produces increased 10 Hz activity with equal frequency and amplitude of the wave form in both hemispheres of the brain (left and right hemisphere).” 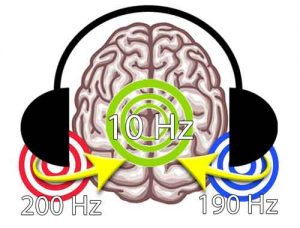 The result of this is called “brainwave entrainment,” which in the examples above, entrain at 10 Hz. Any electrochemical activity of the brain results in the production of electromagnetic wave forms that can be objectively measured with sensitive equipment. Since brain waves change frequencies based on neural activity within the brain, and because neural activity is electrochemical, brain function can be modified by using sound and frequencies. Thus, certain frequencies/sound/music stimulate the brain to produce certain neurotransmitters like serotonin, the “feel good” chemical messenger that helps to reduce pain and increases the feelings of pleasure. More on that and other benefits a bit further down.
Researchers believe that different brain wave patterns are linked to the production in the brain of various neurochemicals associated with relaxation and stress release, increased learning and creativity, memory, and other desirable benefits. These neurochemicals include beta-endorphins, growth factors, gut peptides, acetylcholine, vasopressin, and serotonin.
Neuro-electric therapy engineer Dr. Margaret Patterson and Dr. Ifor Capel, showed in there experiments how a 10 Hz brainwave frequency (alpha brainwaves), increased the production of serotonin, to help ease pain and increase relaxation. They also showed how a 4 Hz brainwave frequency (theta brainwaves), increases production of catecholamines, which are important for memory and learning.
Dr. Capel explains this mechanism a bit further:  “As far as we can tell, each brain center generates impulses at a specific frequency based on the predominant neurotransmitter it secretes. In other words, the brain’s internal communication system—its language, is based on frequency… Presumably, when we send in waves of electrical energy at, say, 10 Hz, certain cells in the lower brain stem will respond because they normally fire within that frequency range.” 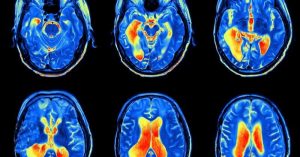 This is also exactly what Dr. Candice Pert has proved, who was a neuroscientist, biophysicist and pharmacologist, who researched at the National Institute of Health (NIH) and taught at the Georgetown University School of Medicine. Dr. Pert was the first to prove that thoughts and emotions create a direct physiological effect on the body, thus demonstrating the long held beliefs of Mind-Body medicine. In other words, she proved that positive or negative thoughts and emotions are always either improving or declining our health, based on the chemicals that are released and transported to every cell. Dr. Pert had this to say about the effects of frequency in affecting the cells of body:
“Energy and vibration go all the way to the molecular level. We have 70 different receptors on the molecules and when vibration and frequency reaches that far they begin to vibrate [thus allowing the cells to be directly affected by vibration]..  Basically, receptors function as scanners. They cluster in cellular membranes, waiting for the right ligand (much smaller molecules than receptors), to come dancing along (diffusing) through the fluid surrounding each cell, and mount them – binding with them and (vibrating) them to turn them on and get them motivated to vibrate a message into the cell. Binding of the ligand to the receptor is likened to two voices, striking the same note and producing a vibration that rings a doorbell to open the doorway to the cell.”  In other words, for any message (vibrating ligand) to be received by a cell, the cell must vibrate at the same frequency as the ligand. Thus, when brainwaves are in the Alpha state, 8 to 14 Hz, that vibration or frequency is on par for more serotonin to be created, for example.

Everyday Applications of This Medicine

There are several different applications that this form of medicine can be used to beneficially impact our lives, which might include stress relief, pain relief, headaches relief, reversing and preventing cognitive disorders like Alzheimer’s and Parkinson’s, reversing and preventing different cancers, increased memory, learning and recall, as well as better sleep cycles, addiction recovery, enhanced cognitive abilities due to synchronization of the left and right brain hemispheres, and enhanced overall well-being.

“[Binaural beats] have been observed by us to be an excellent neuro-pathway exerciser. As such we believe it has great potential for use in promoting optimal cerebral performance. Maintaining and improving cerebral performance throughout life delays for decades the deterioration of the brain traditionally associated with aging…”

As stated above, if one wants to relax and de-stress, listening to a binaural beat that produces alpha brainwaves (between 8 and 14 Hz), more serotonin will be produced as well as more endorphins. This would help to reduce physical and emotional pain, as well as increasing the feelings of relaxation and happiness. Listening to an alpha binaural beat can also help to increase learning abilities. Dr. Georgi Lozanov showed that students in the alpha state can learn as much as five times the amount of information in less time per day, and with greater long-term retention.

Recalling from earlier in the article, we see that theta waves (between 4 and 8 Hz) stimulates the release of catecholamines, which are essential for learning and memory. Theta also dramatically helps to synchronize, or increase communication, between the left and right hemispheres of the brain, which helps to activate more parts of the brain and can lead to greater cognitive function. Thus, if a person is needing to de-stress or wants to learn and recall more effectively, listening to either an alpha or theta frequency can be tremendously beneficial. Also, most classical, harp and piano music shifts the brain to the relaxed alpha or theta state, while most metal, hard rock and similar music shifts the brain to a high beta state, which is stressful and can cause cortisol levels to rise (makes us store more body fat, decreases nutrient assimilation and accelerates the ageing process).

Alpha and Theta frequencies can also be used to help with addiction recovery and behavior modification. Dr. Eugene Peniston and Dr. Paul Kulkosky, of the University of Southern Colorado, helped a group of alcoholics to enter the alpha and theta states. “This experiment involved two groups of alcoholics; one group was sent to a regular “12 step” AA program for help with their condition (control group); the other group received no counselling but were sent for 15 twenty-minute sessions of alpha and theta binaural beats usage (experimental group). Within the AA-attending control group, alcoholism relapse rates 13 months after the test were at 80%. There was no change in levels of depression (as measured by Beck’s Depression Inventory). Within the Binaural Beat using experimental group, 13 months later there was only a 20% relapse, and levels of depression had reduced to that of a third, non-alcoholic control group.“

“If we can help a person to experience different brain-wave states consciously through driving them with external stimulation(binaural beats), we may facilitate the individual’s ability to allow more variations in their functioning through breaking up patterns at the neural level. This may help them develop the ability to shift gears or ‘shuttle’ and move them away from habit patterns of behavior to become more flexible and creative, and to develop elegant strategies of functioning.”

In terms of using the delta frequency, one might use this to fall asleep quicker and repair and recover quicker from injury, exercise or daily physical stress, as human growth hormone (HGH) is released when our brains are in the delta state. This is why it is crucial to get good, deep sleep so that the body can repair and recover optimally each night. Certain medicinal herbs can help a person get deep, restful sleep too. Pharmaceutical sleeping aids actually prevent the body from making certain neurotransmitters and actually destroy brain function when used either briefly or over time. They also prevent the brain from dipping down into the delta state.

While there are numerous other benefits that could be listed, it has been shown that psycho-acoustic medicine is tremendously beneficial and can be used to help improve a wide range of challenges. What might you be able to improve in your life with this form of medicine?

As I wrote this article, I listened to a theta frequency. I’ll post a few different videos below that can be listened to. However, since they are binaural beats, headphones must be used to experience the benefits.

About the Author: Lance Schuttler graduated from the University of Iowa with a degree in Health Science-Health Coaching and offers health coaching services through his website Orgonlight Health. You can follow the Orgonlight Health Facebook page or visit the website for more information on how to receive health coaching for yourself, your friend or family member as well as view other inspiring articles.
Image Credit 1, 2, 3, 4