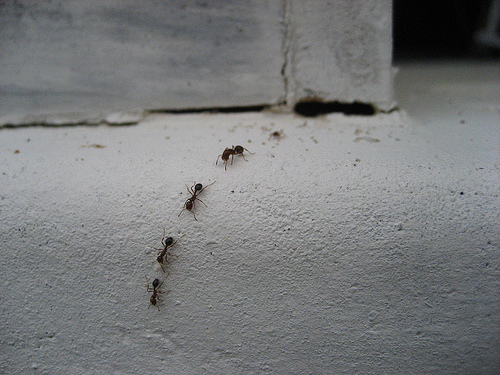 When it comes to growth and expansion in the context of spirituality the consensus would be to go within. Rightfully so, exploring your inner world is where you nourish your relationship with the higher self. It’s where we strive to achieve alignment.

But how much time have you spent reflecting on what you are being told by you outer world?

This is a question I asked myself in a recent encounter with a close friend and his ants.

You see my friend had moved into an apartment and over the course of several months he noticed the apartment had an ant problem. He tried the usual ant removal tactics with little to no success.

During a brief stop in for coffee and chat I noticed his unwanted visitors. He mentioned being at loss as to how to get them to vacate the premises. I suggested we get rid of them by doing some EFT (Emotional Freedom Technique) so that his ant problem would simply resolve itself.

He gave me a puzzled look but being a fan tapping willing to try anything at this point he agreed.

As Abraham Hicks frequently explains you have an attraction point. Your attraction point consists of your thoughts and feelings. All experiences, both pleasant and unpleasant, are attracted to you through your attraction point. From the wealth you accumulate, to the relationships you experience, to the unwanted ants that take residence in your home. They are all end products of what you think and how you feel.

Want to change your circumstances ? Shift your inner being.

We did some tapping work to clear this energy of frustration (towards the ants and other life situations) as well as a variety of aspects that also came up.

As I headed on my way I told him to be patient and to let me know if any changes to his ant situation come about over the coming weeks.

Less than a week went by before I received a phone call from my friend. Five days to be exact. To his amazement his son was playing in the living room, where he always does. This time as he was driving his little toy car up the inner edge of a bedroom door he noticed a hole. The ants had made their permanent residence inside the door. Not only was there a hole, but the previous tenant had left a small amount of putty next to the door frame which he was evidently using in an attempt to plug the ant hole.

My friend was able to now take the appropriate action by replacing the door and his ant problem was solved.

The question that now remains is, what is your outer world telling you?

Nick Breau is a Breakthrough Specialist living in the east coast of Canada. He is the creator of The Inner Shift Method (http://theinnershiftmethod.com) and has spent nearly a decade studying consciousness, human behavior, alternative healing and the law of attraction. The focus of Nick’s work is on empowering individuals (through one on one sessions and workshops) to take charge of their reality by teaching them how to change the circumstances of their outer world by shifting their inner state of being.

By David Zenon Starlyte in Mastershift on August 21, 2014

Living In Dharma – 4 Questions to Finding Your Dharma

By David Zenon Starlyte in Mastershift on August 21, 2014

There is no room for regret in a peaceful life…